I work for a huge company and never is this more apparent than when people come up and say, “Oh, you work for Scripps. Do you know ____?” *sigh* “No.” Nine times our of ten my answer is no. But when a friend heard I’d be traveling to NYC on a more regular basis in 2012, she was kind enough to set up an introduction with a coworker in New York named Mallory Viscardi. Our first meeting consisted of tacos on the High Line and lots of talk about food and husbands. I don’t think I’d ever met anyone who cared so much about cookbooks and the perfect cookie recipes but there she was, and I wanted to be her friend. Three years later, I’m happy to say that thanks to the power of the internet, that worked out quite nicely. She and her husband moved to Nashville, have the cutest little baby girl (who is the star of her Instagram), and the food on her blog, Country Mouse Confessions, is more swoon-worthy than ever. So needless to say, I was thrilled when I received her story.

There’s something about this time of year in the kitchen that makes me miss my own grandmother so much while feeling closer to her at the same time. Mallory’s story reminded me of that, and also reminded me why I love the internet so much. I love that Mallory can share this recipe with all of us so that we can share in her memories of Mimi. I don’t know about you, but I’ll be going cinnamon shopping today! 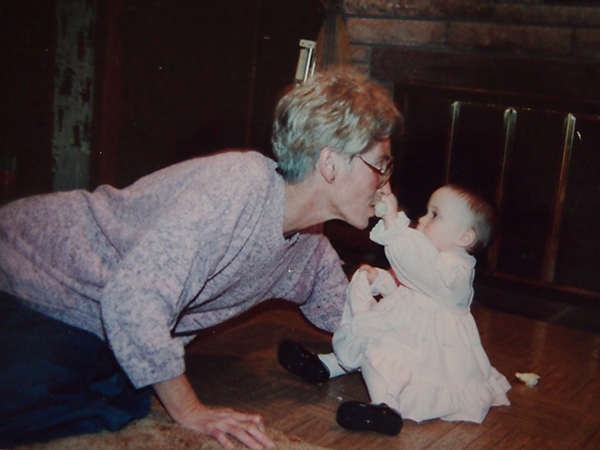 In my (big, Irish) family, as soon as the clock strikes midnight after Halloween, The Holiday Season officially begins. And that means feasting. Now my father’s mother, my Mimi, was magical. She was special every day, but there was something about the dishes she made for the holidays that really made the wonder of the season dance to life. It took years after she passed away for the holidays to feel special again. She ran the house from her kitchen, a place where some of my earliest culinary memories live: the magical way flour floats through the air like fairy dust when you knead bread, the way cookies rise and brown in the oven, the way the whole house smelled when her signature spice blend was used in anything she made (cinnamon, cloves, citrus).

It’s with that signature spicy scent in mind that I make this cranberry dish each year, in my Mimi’s honor. Just a whiff of the cloves, cinnamon, and citrus take me back to those special days I spent perched on a chair at her counter, face smudged with molasses or chocolate, watching her create magic one ingredient at a time. I’m not going to lie to you… Everyone in the family grumbled the first year I made this cranberry sauce, being loyal to the gelatinous glob that comes from a can and tastes something like sugary paste. “Don’t mess with tradition,” they whined. Your family might whine, too. But I promise you, fight the good fight against bland, flavorless cranberry sauce and within a bite or two of this dish even the most grumbly of holiday guests will come around. 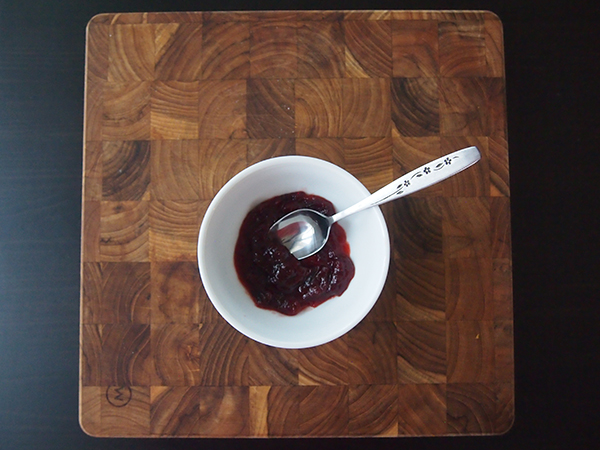 The bright, aromatic flavors in this dish celebrate cranberries as they were always meant to be enjoyed at the holiday table. I know most home cooks don’t stock more than one type of cinnamon in their pantry, but I strongly encourage you ahead of this holiday season to explore the nuances between Ceylon and Cassia. Each has its own signature scent and flavor, and you’ll find using the right cinnamon (or a combination of both) will take your holiday dishes to a whole new level of extraordinary. I’ve included a note about where I order mine at the end of the recipe for you. Additionally, if you’re feeling fancy or adventurous, you can also swap meyer lemon in for the orange (using zest and juice from 1½ meyer lemons) and you’ll get a dish that more acutely plays up the natural and delightful tart-sweet flavor of cranberry. 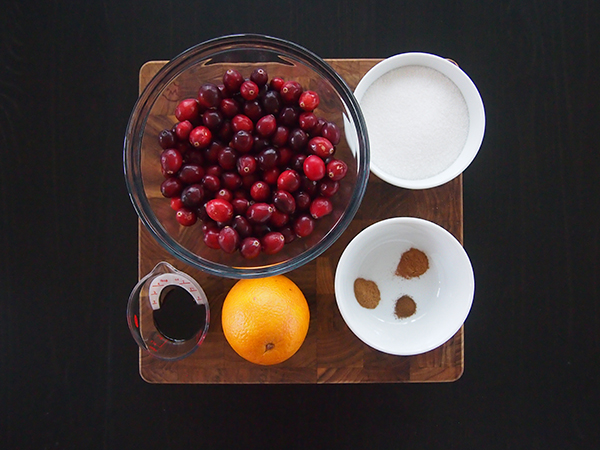 In a medium saucepan, combine all the ingredients plus 1½  tablespoons of water.

Cook over low heat, stirring to dissolve the sugar and combine the spices, juice, and water into a syrup, until the cranberries soften, around 10 minutes.

Increase the heat to medium and cook further until the cranberries burst, another 10-12 minutes (depending on how chunky you want it, cook longer for more burst cranberries / a smoother overall texture). I smash mine down with a spatula toward the end of cooking because my family prefers it more like a sauce; poke at it until you find a texture that looks delicious to you.

Let cool to room temperature, and you’ll notice the liquid thickens up as the natural pectin in the cranberries works its magic. Now all you have to do is try to keep from eating the whole bowl of cranberry sauce before guests arrive.

You can make and store this in the fridge in an airtight container up to a week in advance. I like mine best after 2-3 days, when the flavors from the cinnamon and cloves and orange have really bloomed.

And you can find the cinnamons I use from Savory Spice Shop online: Ceylon, Cassia. 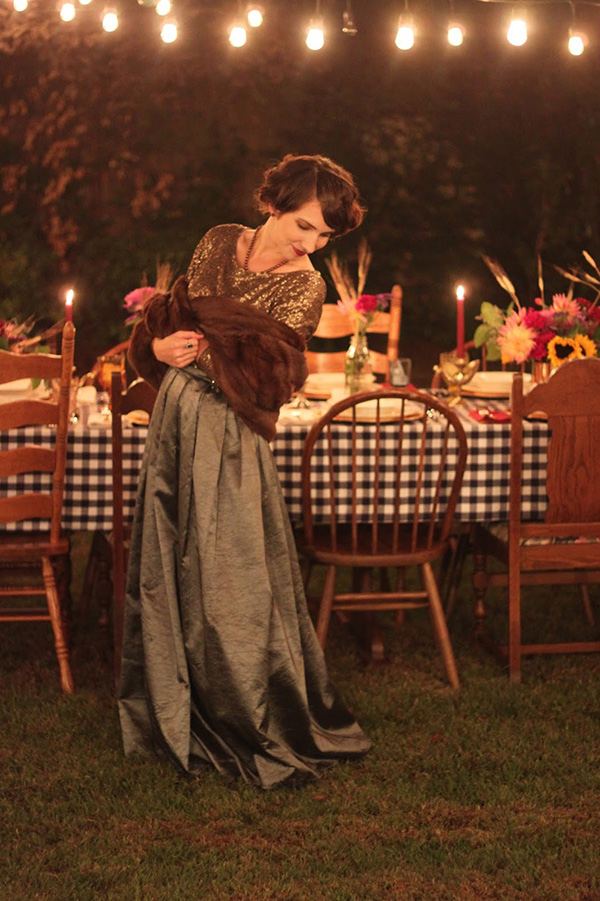 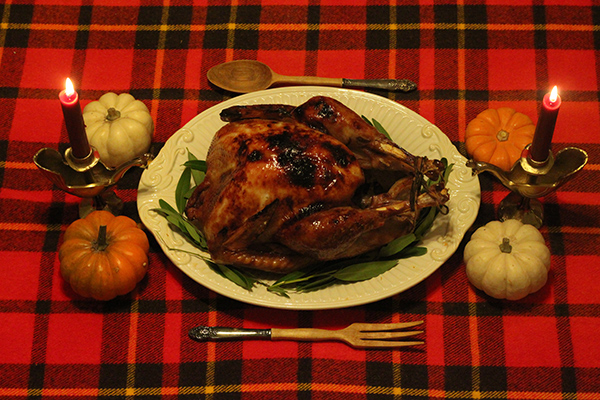 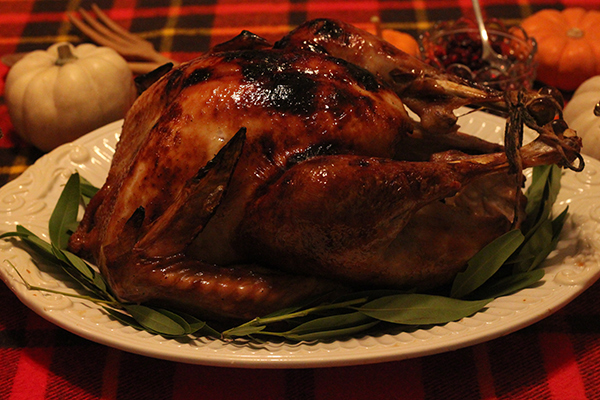