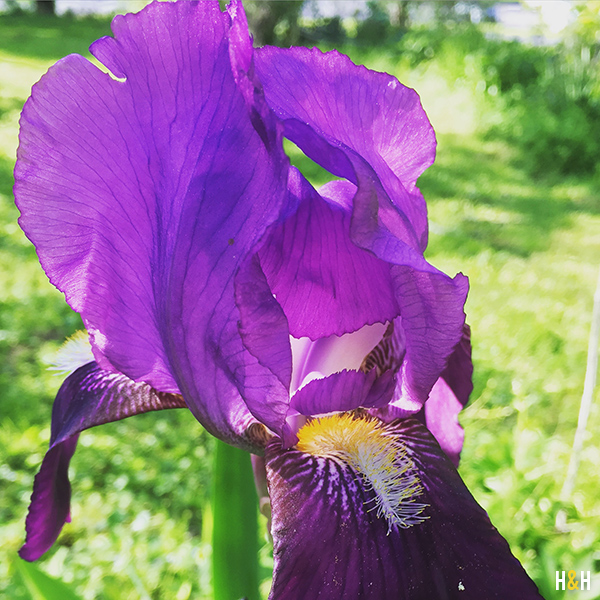 I took a picture of this iris the other day and couldn’t resist posting it here. I have always been in love with these flowers, which happen to be the Tennessee state flora. They come in a variety of colors, but the deepest purple is my very favorite. Recently I learned something new.

The flower was named for the Greek goddess Iris who was said to be the personification of the rainbow and a messenger of the gods to humanity. Isn’t that lovely? Each time I see one of the delicate flowers, I’m always infatuated, but now I think I will pause and see if there’s something else I should be noticing at that very moment.

Spring has a way of awakening our senses and waking up our brain cells. What is it trying to tell you?

This weekend, Springtime was in full force here in Easts Tennessee. We spent Friday night and Saturday downtown for the Rhythm & Blooms Festival. The weather was a bit iffy, but armed with Bean boots, coffee, good music, and better friends we had a lovely time. 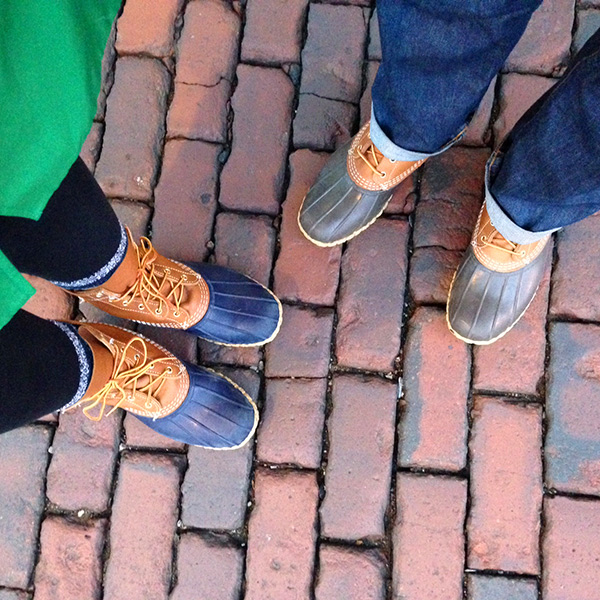 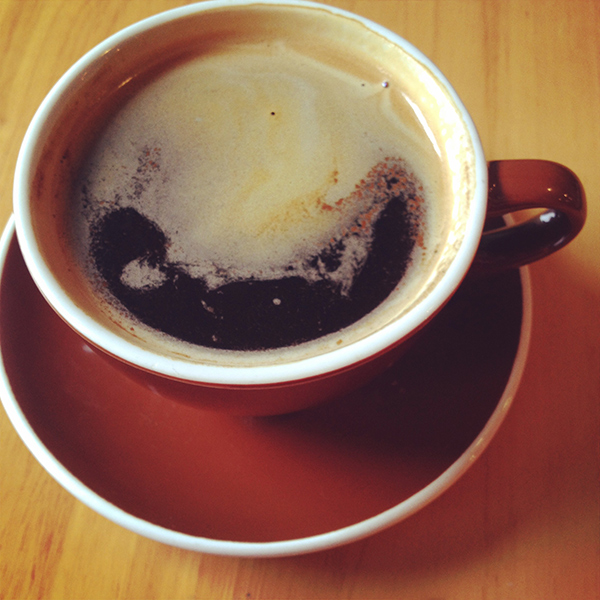 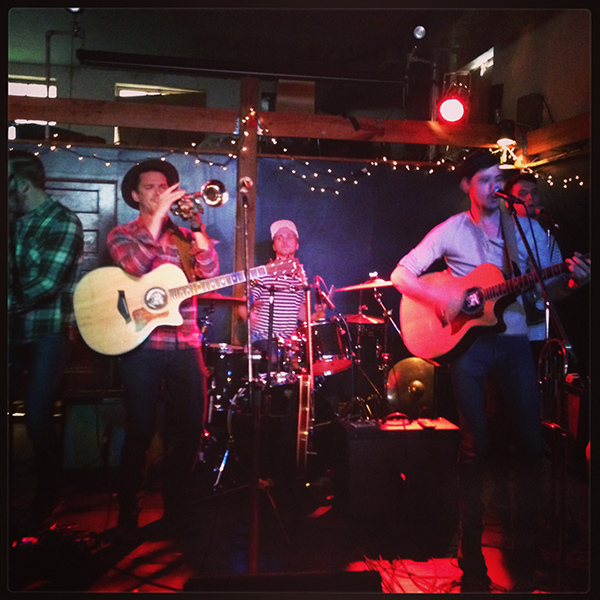 On a recommendation from a friend we saw John & Jacob at The Pilot Light. They were fantastic! 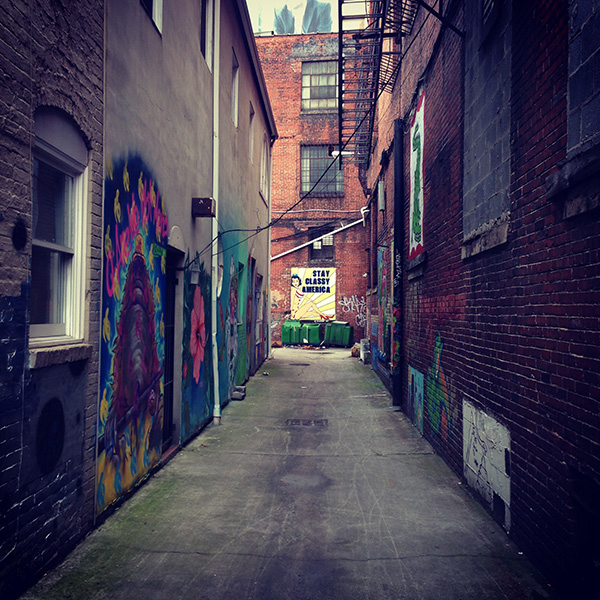 Alley art in the Old City 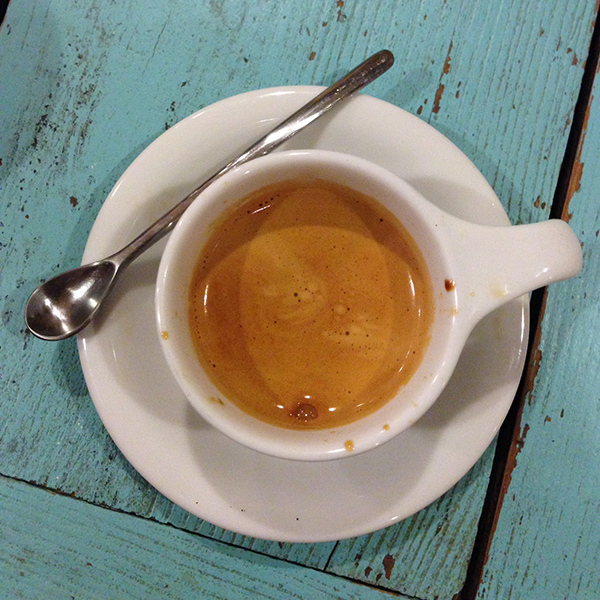 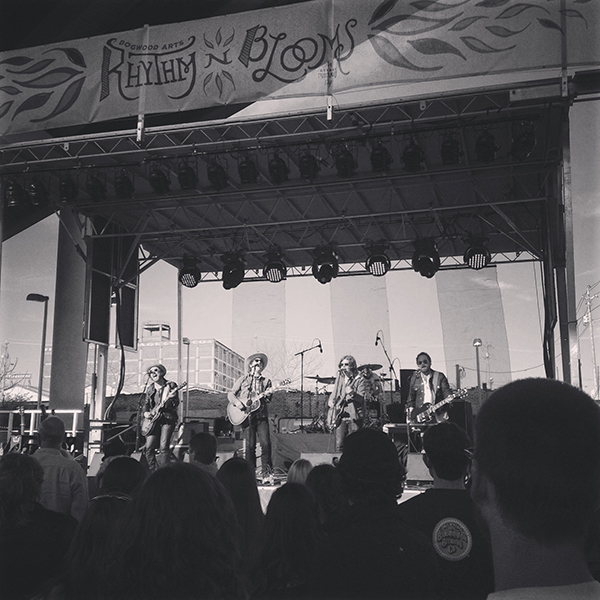 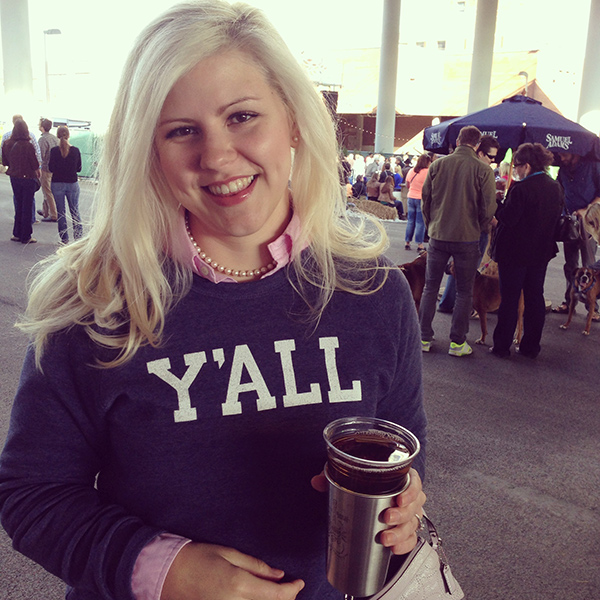 My new favorite uniform: stolen shirt from Husband, Y’all sweatshirt (the softest ever), and pearls (of course). 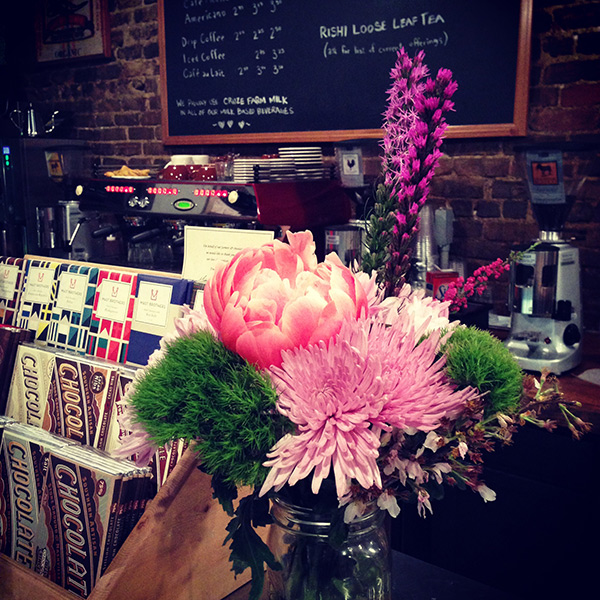 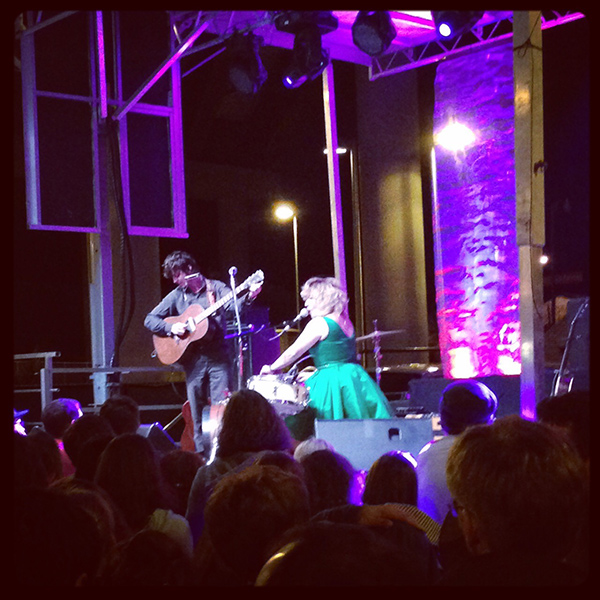 Our favorite act of the weekend (& the reason we bought the passes in the first place): Shovels & Rope. 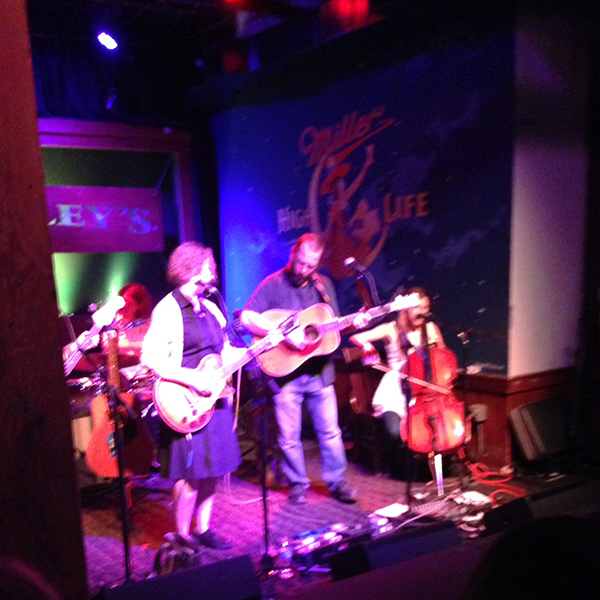 Our own local stars The Lonetones. Our friend Cecilia is the cellist on the right. 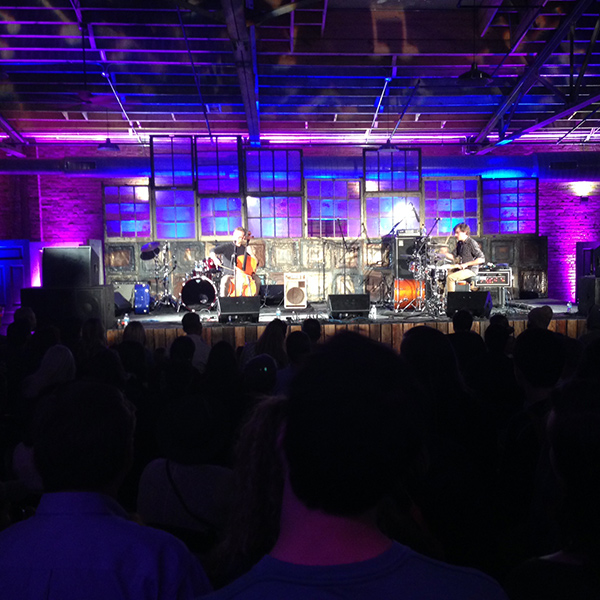 While Spring styles are debuting in NYC for Fashion Week, let’s take a look at your Fall wardrobe.

Fact: When I laid my big brown eyes on Veronica Beard‘s Fall collection, my little Southern heart went aflutter. There are several things a Southern woman looks for when choosing her Fall wardrobe aside from the obvious fashion-foward considerations…

1.) We like cuts that give a little tip of the hat (or coonskin cap as the case may be) to the past.

2.) We love having at least one element that makes us feel ultra feminine–whether it’s a touch of pink or a silk skirt.

3.) There must be sass. Every Southern girl has an attitude, and we’re proud of it. We’re strong, we’re opinionated, and we’re self-reliant. The most important accessory a belle wears is that glint in her eye that tells the world not to mess with her.

So, with that in mind, it should be easy to guess why I’ve been swooning over Veronica Beard‘s Fall collection since it’s debut. These girls may be in Manhattan, but they have enough soul for a gal from Tennessee. 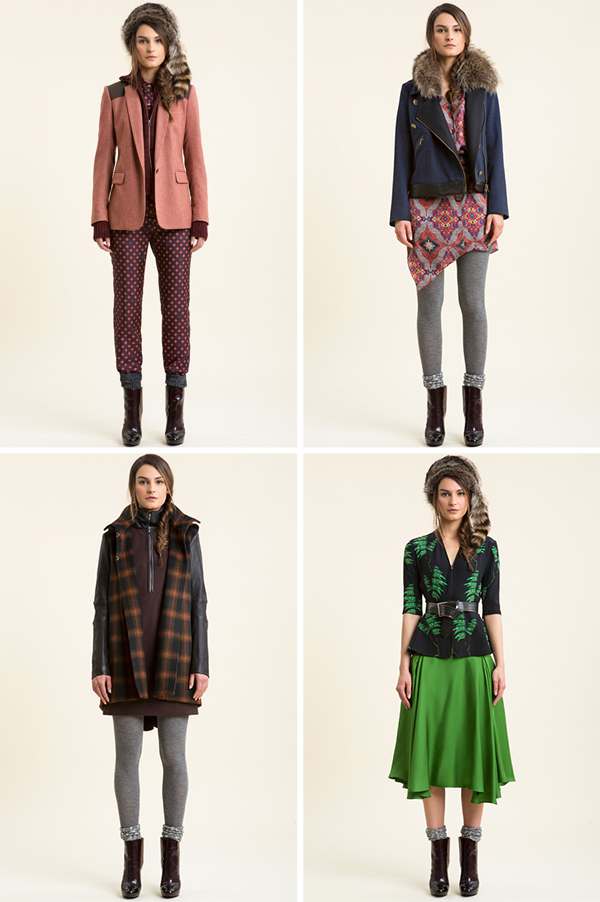 A girl that wears Veronica Beard know how to shoot a gun.

She loves her daddy.

Her childhood crush was Davy Crockett himself. 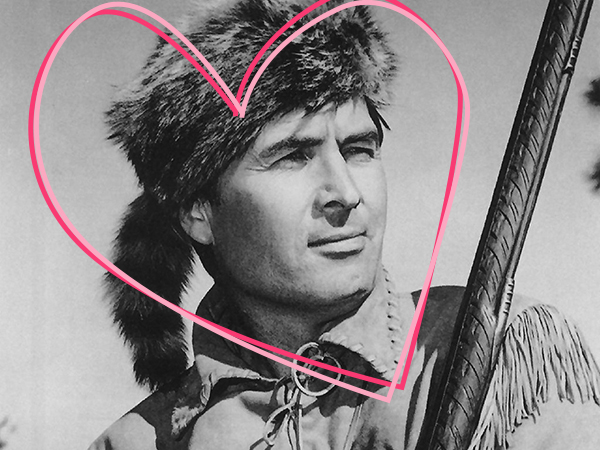 She can forage for her own food, and knows how to season an iron skillet.

She may even possess the ability to talk to animals.

The phrase “…wild as a mink but sweet as a soda pop”? That was written for her.

Last weekend, I hosted a Welcome Home party for my honey! (For those that don’t know, he was here all summer.) I tried to make things as ‘East Tennessee’ as possible. There were outdoor games, a galvanized tub of beer, plenty of fried chicken, and this Tennessee Mountain Punch. The recipe was an experiment at the time, and the results were super tasty! The great part? You can make as much or as little as you like! 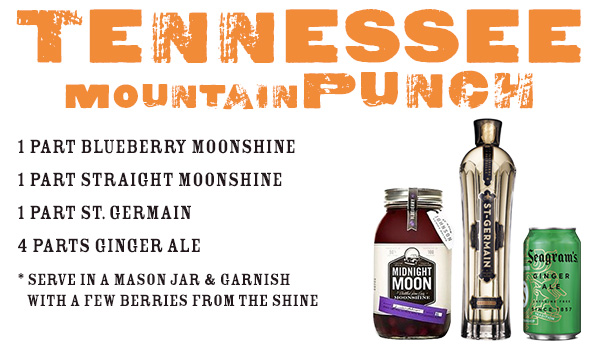 I was born in Tennessee, but, for the first few years of my life, my family didn’t actually live here. Then, when I was 9, we moved to East Tennessee. I was less then thrilled at my new surroundings, and this was only exacerbated when, on the 1st day of school, I was shoved into a large group of singing 4th graders. They had just burst into a song about a girl that was ‘half bear the other half cat’ and something called ‘corn from a jar.’ I was appalled. 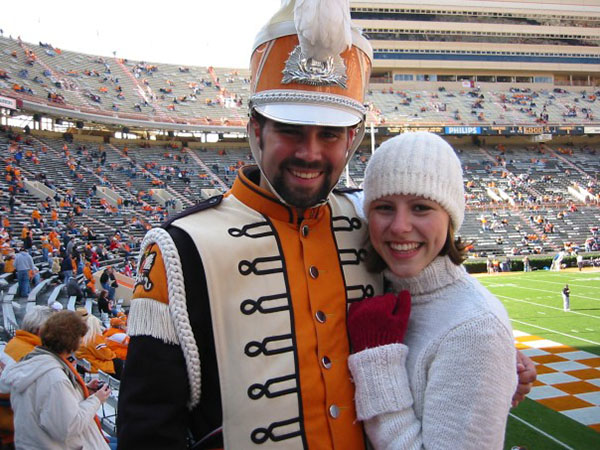 Husband and I in 2005. We actually used this picture for the ‘guest book’ at our wedding, and it now hangs in our bedroom.

Fast forward 18 years and my husband & I are both UT graduates, two of our best friends actually said their wedding vows on that ‘hallowed hill in Tennessee,’ I have been known to partake of ‘corn from a jar,’ and I have seen for myself the original written lyrics of “Rocky Top” hanging in the home of the esteemed former Pride of the Southland director WJ Julian. (For the record, Felice and Boudleaux Bryant literally crossed a few other animals off the list before deciding she would be ‘wild as a mink but sweet as a soda pop.’)

Now, I will be the first to tell you that football is not my thing. Sure, I love picking out a cute outfit and tailgating for a couple of hours up the hill from Neyland stadium. I appreciate the spirit & talent of the SEC, but the main reason I go to football games is to see the band form the Power T. I am known to leave football games after the halftime show because, by that time, I have usually lost interest whatever it is those boys are doing on the field. 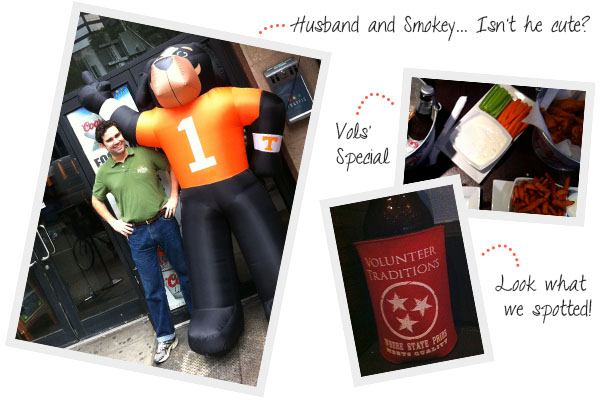 However, today, football may have been just what I needed. Around 4, Husband and I made our way to a bar in Midtown Manhattan called Traffic and watched the game with a room full of other Big Orange fans dressed, of course, in orange and singing “Rocky Top” loud and proud. In a week full of high fashion, busy streets, and hot subway rides, it was exactly what I needed. New York City is fun, but it can get overwhelming and make a southern girl like me feel very alone. Isn’t it funny how a song that at one point in my life I found so alienating can now make me feel so at home. 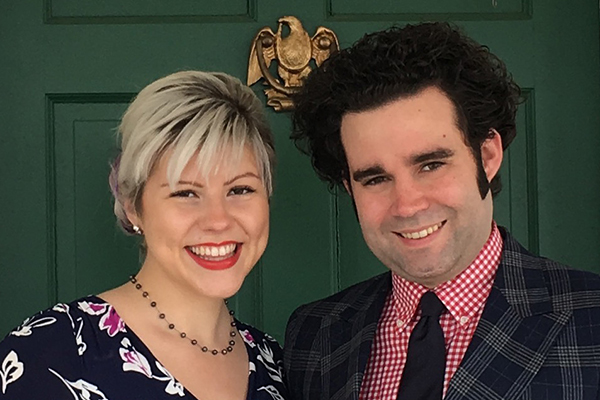