This weekend was off-the-charts epic beginning with a special visit on Friday afternoon. As we were running around getting ready for my 30th Birthday Bash, three very special guests stopped by.

We’ve been lucky enough to get to meet all four Kerr boys that grew up in this house including Chris, who lived here with his own family when we bought it. He is such a sweetheart, and, being a fellow history-nerd, we found an instant connection. So as a birthday surprise, he brought over two members of Rivermont’s living history for us to meet. 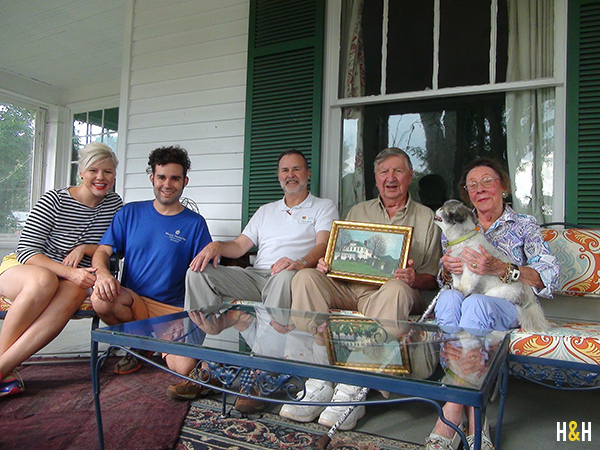 Whitney Dunford (seated on the far right) is the granddaughter of the very first family to live at Rivermont the Harveys. Next to her is Frank Pettaway. Frank lived at Rivermont with his grandparents who owned the house from 1936-1957. I’m hoping this will be the first of a few visits with these two! It was so exciting to hear about the house’s beginnings. Frank even started naming off the animals that lived on the land when it was still a working farm.

Frank is holding a painting of Rivermont done by W. Russell Briscoe in 1939. With the exception of a tree here and there, the “ol’ barn” as Nancy called it remains unchanged. It was so special to get a glimpse of the painting in person! Briscoe is somewhat of a folk art legend here in East Tennessee. He was an insurance man that served on several boards in Knoxville. But his wife, Deas Adams, seemed to be the one that encouraged his artistic side.

During the Great Depression, they started a toy company, and I’ve read that their dollhouses were even sold in FAO Schwartz. This painting of Rivermont is said to be one of his earliest–he wouldn’t actually start painting seriously for nearly two decades. But it does display the saturated colors of his other paintings. And bonus, it shows my very favorite angle of the house! (Click to see this eerily similar picture I took a few weeks ago.)

Briscoe’s paintings are bright depictions of small town life with a somewhat flattened style that brings the scene closer to the viewer. Each painting is a nostalgic view of the subject and will make you feel like you’re looking at memories rather than specific places. (Click here to see more paintings by W. Russell Briscoe.) 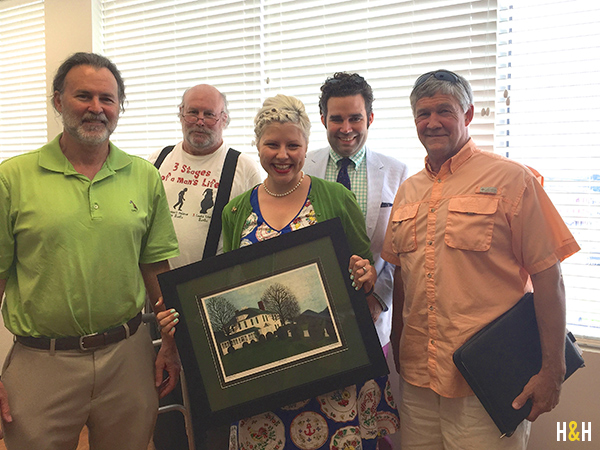 When we bought the house, Chris presented us with a framed print of Briscoe’s Rivermont painting signed by each of the “Kerr boys” that were at closing. It hangs in our dining room.